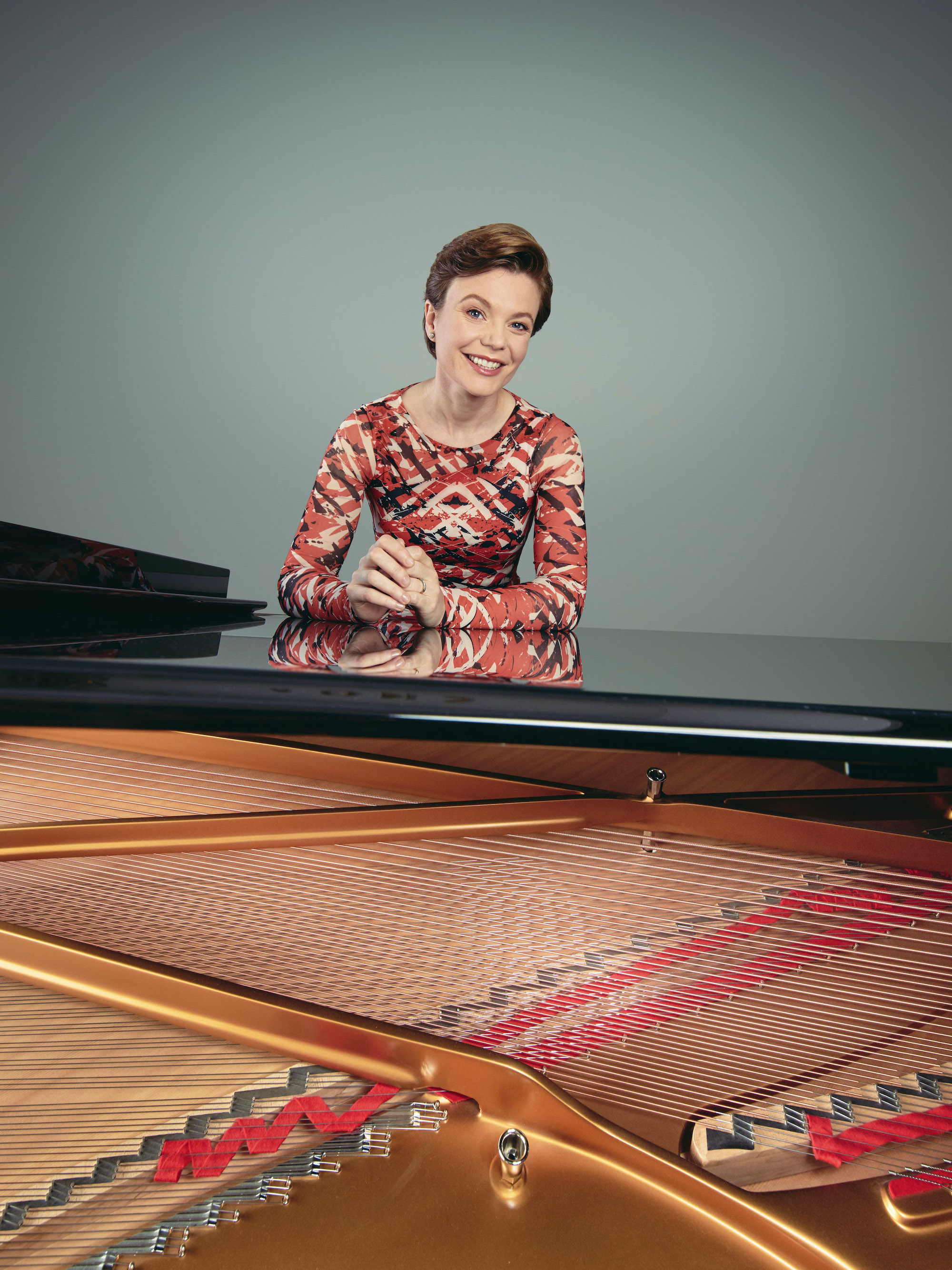 "energetic, emotionally moving, and full of a whole spectrum of colours" — Scott Noriega

Andrzej Panufnik (1914-1991) was a Polish composer and conductor born in Warsaw. His father, Tomasz Panufnik, a violinmaker, and mother, Matylda Thonnes Panufnik, a noted violinist, pianist and composer, exposed him to music from an early age. In 1932, at the age of 17, he entered the Warsaw Conservatory to study at first percussion, later majoring in both theory and composition. After the completion of his degree, he travelled to Vienna to study conducting with Felix Weingartner, eventually following him, after the Anschluss, first to Paris, then London. But he returned to Warsaw during the war ywars, participating in the highly restricted musical life of the city, most notably performing with Lutosławski in duo-piano concerts. Many of his early works were destroyed, not due to the war, but rather to a female tenant that had moved into his apartment when he left to care for his ailing mother - she saw the papers and assumed that they were all trash. His interest in various Modernist techniques caused him strife in the then Stalinist controlled Poland. In the mid-1950s, while on tour in Zurich, he made his move to escape his homeland, eventually settling in England and becoming a British citizen in 1961. It was not until 1990 that he returned to Poland, now a country with a democratically elected government. He was knighted in 1991.

But this release features not only that composer's music, but also the music of Roxanna Panufnik, the composer's daughter. Born in London in 1968, Roxanna, too, had musical exposure from an early age, later studying at London's Royal Academy of Music. She has gone on to composer a wide range of compositions - opera, ballet, choral works, chamber music, music for film and television, and solo piano works - which are performed the world over. The current release features her original compositions, but also reworkings or arrangements of her father's works, originally for voice and piano, for solo piano.

Andrzej Panufnik has three major works for solo piano. The 12 Miniature Studies (1947, rev. 1955/1964), which were initially called Circle of Fifths, is comprised of a series of études beginning in C sharp (Major / Minor) and successively moving down a fifth at a time, until finally reaching the key of G sharp, a fifth above the first; each étude shares a similar melodic line, so that interest in maintained through the contrast of tempo, dynamics, meter, and other musical aspects. Reflections (1968) was completed within days of the birth of Roxanna. It is, in the composer's own words, representative of "contemplation… and reflections in the tangible sense… based on constant reflections of a single triad with its perpetual transpositions used both vertically and horizontally." It is a sparse-sounding work, with an angular melodic line, and harmonic clusters reminiscent in sound of Bartók's night music. The Pentasonata (1984) is the composer's last work for piano, written in the composer's 70th year, and dedicated to his wife. The work predominantly uses a pentatonic scale, and is composed of five sections, the first and last of which use a meter of 5/8 or 5/4. The beginning and ending play with the meter creating fascinating rhythmic features, while the middle of the work is more slow and contemplative. It is a perfect example of the composer's will to "achieve a balance between heart and mind, intellect and emotion."

The transcriptions of Modlitwa (1990/1999, arr. 2013), based on an unfinished song, and the three (of five) songs, set as a miniature suite here entitled Hommage à Chopin (1949/1955, arr. 2013), are both lyrical compositions, similar in feeling, and - besides the playfully quirky second of the Chopin settings - all meditative in nature. The original compositions of Roxanna Panufnik are comprised of two works here. Second Home (2003, rev. 2006) is, according to the pianist and booklet writer, "a series of variations on the Polish folk theme Hejne ino, fijołecki leśny! and expresses her sentiments for her father's Polish homeland." The second work, Glo, is short, a minute-and-a-half in length, and was written to commemorate the death of a family friend.

Throughout this recital Clare Hammond proves to be a very fine advocate of this music. Her interpretations match the goal of the composer: Not only are they well thought out and intellectually stimulating, but also energetic, emotionally moving, and full of a whole spectrum of colours - in a word, bracing. Recorded in excellent SACD sound, particularly luminous, and with well written and informative program notes, this is a release that everyone should own. Buy it. You'll enjoy it for years to come.

The BIS Recording brings together some outstanding piano music by Panufnik senior, stunningly performed by Clare Hammond, and recent work by his daughter as well as a couple of ‘retrospective collaborations’, including a solo piano version of the Modlitwa heard on the Signum disc. Andrzej’s dazzling skill and imagination is immediately apparent in the wonderful Twelve Miniature Studies (1947, rev 1955/64) that opens the recital. Why this 20-minute set, full of invention, beauty and excitement, is not in the repertoire of more pianists is a mystery.

Hommage à Chopin is an arrangement by Roxanna of three of Andrzej’s five vocalises of that name for solo piano, and they are truly haunting, as is the transcription of Modlitwa. The late Pentasonata is relatively well known but a performance as vivacious and, at the same time, as attentive to detail as Hammond’s makes one listen to it as though for the first time - BIS’s superb production also plays a part in this.

Reflections, from 1968, is grittier but the musical and philosophical preoccupations are essentially the same, and Hammond is as convincing in the earlier style as in the later. Between these two works come Roxanna’s Second Home and Glo. The way Hammond plays the opening repeated notes of Second Home would alone be worth the price of the disc.

Best known for his big orchestral works, Andrzej Panufnik had a mixed relationship with the piano. Though he failed a piano entrance exam at the Warsaw Conservatoire, Panufnik survived the war as a café pianist, and one of his first works when he was able to resume composition was written at the keyboard and eventually published as the 12 Miniature Studies. Premiered in Kraków in 1948 and based on the circle of fifths, they already show his preoccupation with patterns and symmetry. Most last less than a minute, yet they are strongly contrasted and prove arresting in Clare Hammond’s commandingly virtuosic performance.

Geometric forms also inspired Panufnik’s other two works for solo piano, Reflections - composed in 1968 at the time of his daughter Roxanna’s birth and premiered five years later by John Ogdon - and the Pentasonata. Roxanna is represented here as both an arranger of her father’s music and as a composer in her own right. Her first piano piece, Second Homa, weaves variations around a haunting Polish folk tune in satisfyingly scrunchy harmonies, adding variety to Hammond’s imaginative performance.

Released to mark the centenary of the birth of Polish composer Andrzej Panufnik, this disc is the first recording to present the works of both Andrzej and his daughter Roxanna side by side. The Panufniks have found a worthy champion in Clare Hammond, whose intelligent performances balance emotional reserve with witty characterisation. The collection includes four world premiere recordings: Hommage à Chopin (written by Andrzej in 1949/55 and arranged by Roxanna in 2013); Glo; Second Home (both by Roxanna); and Modlitwa (penned by father and daughter as co-composers). Hammond, who has worked closely with Roxanna, captures both the brilliance and the brooding in these works. Modlitwa (‘Prayer’, 1990/99, arr 2013), was originally written for voice and keyboard; its sparse textures use mainly the middle to upper registers, creating an ethereal quality. Second Home is Roxanna’s first piece for piano. A set of variations on a Polish folk theme, it is curiously evocative, with ample use of the pedal. A fascinating compendium, expertly executed.

Though Panufnik is known principally as an orchestral composer, his piano music shows a sensitive and masterly understanding of the instrument's tonal resources as well as a variety of playing styles and textures, deftly illustrated in the brief but compelling Studies. The idiom is dissonant, but with conventional phrasing and, from time to time, a suggestion of a kind of tonal hierarchy.

Clare Hammond, who was a central figure in the Panufnik centenary of 2014, performs with authority and great imagination. She includes two works by Roxanna, Second Home (2003, rev. 2006) and Glo (2002): the former, her first work for piano, is a series of arresting variations on a Polish folk song; it is by turns lyrical and richly chordal. Glo is a short work written in memory of a friend who died of cancer. The BIS sound is, as usual, stunning.